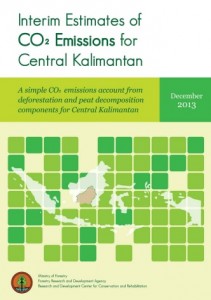 With a large forest area and vast areas of degraded peatlands, coupled with high rates of deforestation, Indonesia’s land sector represents a significant source of GHG emissions. As such, the Government of Indonesia (GOI) has committed to reducing GHG emissions by 26% below ‘business as usual’ levels by 2020, and by 41% with international assistance, with up to 80% of the proposed reductions coming from changes to forest and peatland management. Indonesia’s efforts are expected to be enhanced through access to international finance that will support policy, planning and on-ground REDD+ activities. Consequently, the GOI has entered into an agreement with the Government of Norway on REDD+ which includes up to USD 1 billion in performance-based payments for emissions from forests and peatlands.

To better understand, manage and ultimately reduce its GHG emissions, Indonesia needs to first be able to measure its GHG emissions from forests and peatlands, then report the results and submit these for verification to provide confidence that the stated GHG emissions reductions are occurring.

Results show that annual deforestation rates in Central Kalimantan vary markedly from year to year in the period 2000 to 2009, ranging from around 14,000 ha to over 147,000 ha. Most deforestation occurred in Secondary Dryland Forest and Secondary Peat Swamp Forest. Correspondingly, annual GHG emissions from deforestation varied greatly from 8.5 million to 81.9 million tCO 2-e, with the largest years being 2006-2007. Annual GHG emissions from decomposition of disturbed peatlands in Central Kalimantan are estimated to range between 58.7 million and 60.7 million tCO 2-e.