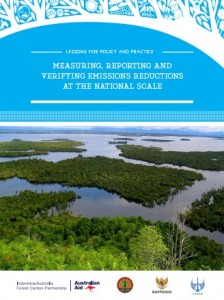 Download PDF
Indonesia is well known for its large forest estate and high rates of deforestation; however, the value of its forest carbon resources has been poorly understood. The diversity of forests and land management across the 180 million hectares of forest on more than 17 000 islands presents challenges to credibly estimating deforestation rates and the resulting greenhouse gas (GHG) emissions. Estimates vary widely depending on the methods and definitions applied.

According to the Indonesian Ministry of Environment’s second national communication to the United Nations Framework Convention on Climate Change (UNFCCC), around 60 per cent of Indonesia’s GHG emissions come from activities in forests and peatlands. However, as these estimates are subject to considerable uncertainty, the Government of Indonesia has identified improving them as a priority for future national GHG inventories. To achieve this, the Government of Indonesia is developing a national forest measurement, reporting and verification (MRV) system.

Effective, efficient and transparent forest MRV systems underpin efforts to reduce emissions from forests. They are the basis
for national inventories of GHG emissions and removals (the uptake of carbon in the land) and other international reporting
requirements. MRV systems can also support national policy development and implementation, including through contributing to analysis of land sector policy options.

The Indonesian National Carbon Accounting System (INCAS) Program under the Indonesia-Australia Forest Carbon Partnership (IAFCP) provided funding and technical assistance to Government of Indonesia agencies for the design and implementation of a national-level forest MRV system called ‘INCAS’. INCAS will provide a credible basis for reporting
GHG emissions and removals from forests and peatlands. This includes emissions reporting to the UNFCCC and bilateral partners for activities to reduce emissions from deforestation and forest degradation (REDD+).
Year
2015
Authors
Indonesia-Australia Forest Carbon Partnership