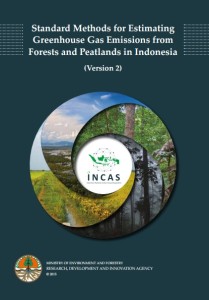 Download PDF
This document (Annex) describes in detail the standard methods developed by the Indonesian National Carbon Accounting System (INCAS) to quantify net greenhouse gas (GHG) emissions for forests and peatlands in Indonesia in a transparent, accurate, complete, consistent and comparable (TACCC) manner. The first version of the standard methods, described in Krisnawati et al. (2015a) were initially tested and refined to estimate emissions and removals from forest and peatlands in Central Kalimantan as the REDD+ pilot province, the results of which are reported in Estimation of Annual Greenhouse Gas Emissions from Forest and Peat Lands in Central Kalimantan (Krisnawati et al., 2015b). These methods were improved as the coverage of INCAS was expanded to cover all provinces in Indonesia. Improvements arose due to access to new data sources and enhanced technical expertise.
Year
2015
Authors
Haruni Krisnawati, Rinaldi Imanuddin, Wahyu Catur Adinugroho, Silver Hutabarat